It is a highly precise and powerful, four-blade, in-rows power harrow system compatible on the basic platform of Slopehelper. We have developed a power harrow that, in combination with our autonomous vehicle, can weed, shake and plowed soil between root area in every row of your plantation. With this type of power harrow, you will experience innovated level how one of the most common functions during the season can simply be completed. 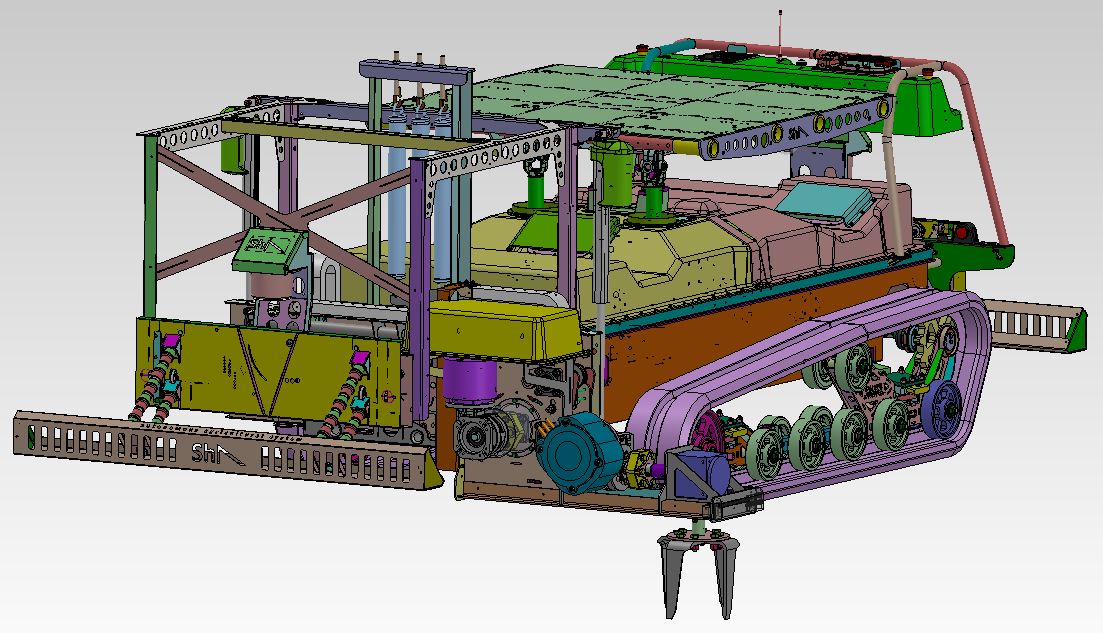 Power harrow storage is on a specially designed storage cradle. To get the power harrow from it and attach it to the vehicle require a mini-garage crane or forklift. For further installation and adjustment there is existing an optional moveable cradle which allows you to easily maneuver and attach the equipment.

Once mounted on the vehicle, the power harrow system it is necessary to be connect with two power sockets and plugin to the main system of the base platform.

On the board computer, there will be shown a notification that lets you know the power harrow is connected and ready to use. Select the option, height, number of rows, etc. and set the vehicle to the starting position. After that you only need to choose the option an autonomous mowing and press the START button.

Slopehelper with installed in-rows power harrow on it, will always move through and keeping the right side of the passage and leaving behind a solid cultivated soil and weed area around the trees.

Small amount of spare parts and transmission via V-belt and moving system inside-out by a rack and pinion means low operation costs and less downtime.

Powered by a high power, low voltage electric motor, the power harrow together with the Slopehelper will experience very quiet power harrowing and plowing between the root area. It allows the autonomous system to operate day and night, without disturbing the surroundings.

On the back right side of the vehicle, there is installed a highly sensitive radar which recognizes the stems. So the head of the power harrow, radar-driven, with the help of a rack and pinion synchronized system can follow the order of the trees, which reduces the risk of damage to the trunks.

Independently adjusting the position of the Slopehelper on the right side and constantly maintain a distance from the row of 30 cm depending on the terrain situation allows the power harrow to get as close as possible to the roof area.

The four-tines rotating head enables power harrowing at a higher speed which additionally saves time for other options. Sh power harrow system offers you the opportunity to process the soil around the trunks and to allow easier absorption of water and nutrients.

The whole power harrow system is in a frame that connects to the base platform at one end and the ability to connect the safety bumps to the front to allow the safe option in an autonomous mode of vehicle.

In the harrowing system there is no drop of hydraulics, lubricants (except bearings) or other types of oils, which makes it the only “in row” power harrow of this type on the market.