Because can maneuver on slopes up to 45 degrees with the thank to the self-adjusting platform it can reach even the most inaccessible parts on the plantation.

-There is no close encounter of people with harmful chemicals.

The European journal of respiratory diseases published research done on representative sample for Cytologic changes of the respiratory tract in vineyard spraying workers. A cytologic investigation of sputum samples, obtained from rural workers engaged for years in spraying of vines, was performed in comparison to that of inhabitants of the same environment who were not vineyard workers. Sputum specimens were conventionally stained with hematoxylin and eosin and were also tested for copper by rubeanic acid. Macrophages containing copper-granules in the cytoplasm were found in 64% of the workers engaged in vine spraying, compared to none in the control group. Sputum specimens were evaluated in respect of eosinophils, respiratory spirals, respiratory cell atypia and squamous metaplasia. In both groups, abnormal findings were more frequent in smokers than in nonsmokers. Atypical squamous metaplasia was observed in 29% of smokers who were vineyard workers.

Our team of scientists is developing a system that will completely eliminate the presence of people during the spraying of plantations. Slopehelper autonomous agro-system is the right solution for that.

The biggest benefit of the SH system is that during the spraying season, the operator does not have any close encounter during the spraying process. The autonomous agro-system performs the whole pollination of the plantation without the presence or supervision of people.

Whole spraying procedure it is expensive, time-consuming, and environmentally unfriendly to routinely treat with fungicide. That’s why the second benefit of using the Sh spraying system is that the whole spraying process can be done several times a year with natural means, such as sulfur and to protect the environment.

The third benefit of using the Sh sprayer of course it is, cost reduction. Using of less expensive and cyclic chemicals would certainly increase the number of sprays throughout the year. But even in such an example, the SH system with its mode of operation reduces costs. For example, the use of sulfur is a very cheap and effective way to protect against harmful insects as well as against powdery mildew, but it must be applied to the trees after every rain or dew. This is the least problematic for the autonomous system Sh. For only 4€/charge the batteries, tank with water and natural cheap means for spraying, the whole thing can be done without supervision or presence of people.

Saving time is just a bonus benefit for every owner of Slopehelper agro-system.

The ducted fan sprayer just like the other products in the range of hinged equipment for the system Slopehelper, is characterized by simplicity of use. The sprayer itself has a powerful brushless motor which provides the continues “printing” movement of the head as it would constantly spray the liquids all over the surface of the stems. When connecting to the base platform, on the board computer there will be displayed settings options of the sprayer. The operator can decide between, the height of the trees / vines, the width of the row, and based on that determine the type of spraying. There are two types of spraying, by moving the ducted head and by a fixed angle. The movement of the head implies that the ducted fan is constantly moving up and down (for tall trees) so that it can cover their entire surface from the highest to the lowest point. Fixed position it is mostly intended for young trees or vineyards, where the head is raised above the tree and with its powerful fan it covers the whole plant.

The ducted sprayer storage is on a specially designed storage cradle. To get the sprayer from it and attach it on the Slopehelper base platform require a mini-garage crane or forklift. For further installation and adjustment, there is existing an optional, specially designed for them moveable cradle which allows easily maneuver and attach. However, the whole process of maneuvering with the equipment is easy and simple, and the attachments will not be left on the ground in your barn or garage.

Once mounted on the vehicle, the basic platform turns into the most innovative sprayer on the market so far. After connect with two power sockets and plugs to the main system of the base platform on the board computer, will be shown a notification that lets you know the ducted sprayer is ready for work. By giving only a few commands the agro-system can complete spraying of the plantation in the weather conditions when it is most suitable for it (late at night before sunrise).

The head of the sprayer is super powerful, agronomical performed, aerodynamic fan with adjustable speed. Depending on the width of the row and the size of the trees the power of the air flow can be very easily regulated according to the parameters of the board computer.

Small amount of spare parts and transmission by electric actuators means less downtime and low operation costs. Equipped with 4 standard nozzles and standard hoses that connect them to the pump and then to the tank, makes the SH sprayer one of the simplest to maintain in the world.

Powered by a high power, low voltage brushless electric motors, which are the same in the base platform will experience very quiet moving, which allows it operating day and night without disturbing the surroundings and do not harm the health to all participants around the vehicle.

On the cargo platform where the tank with liquid up to 2 tons is located, prevents the vehicle from rolling over. The axis of gravity is always in the center and it always holds the tank horizontally during operating, even at high inclinations.

Because can maneuver on slopes up to 45 degrees (100% slopes) and thanks to the self-adjusting platform it can reach even the most inaccessible parts on the plantation.

The biggest benefit of the SH system is that during the spraying season, the operator does not have any close encounter during the spraying process. The autonomous agro-system performs the whole pollination of the plantation without the presence or supervision of people.

There are no more such terrible situations: 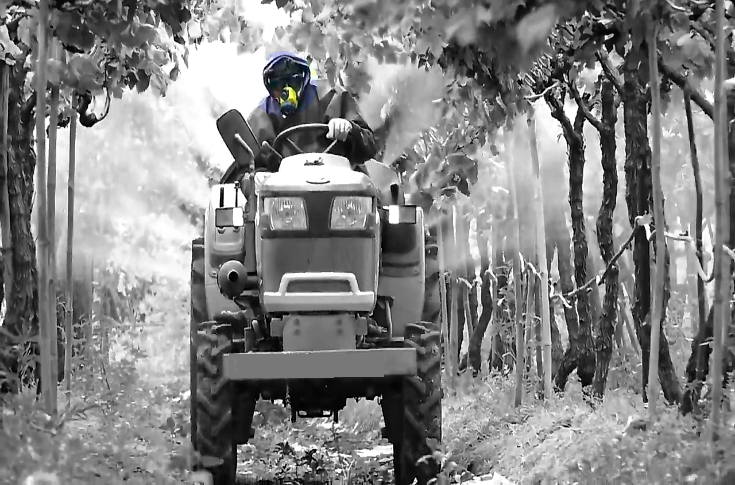